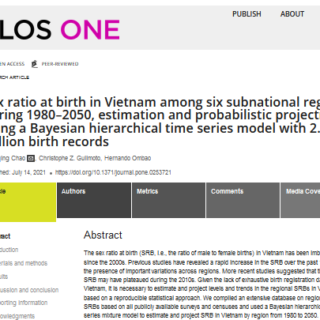 Christophe Z. Guilmoto, a member of the territorial dynamics research area at CSH, with Fengqing Chao and Hernando Ombao (Affiliated to King Abdullah University of Science and Technology) written an article entitled “Sex ratio at birth in Vietnam among six subnational regions during 1980–2050, estimation and probabilistic projection using a Bayesian hierarchical time series model with 2.9 million birth records”, has been published in PLOS ONE, online on 14th July 2021.

Abstract: The sex ratio at birth (SRB, i.e., the ratio of male to female births) in Vietnam has been imbalanced since the 2000s. Previous studies have revealed a rapid increase in the SRB over the past 15 years and the presence of important variations across regions. More recent studies suggested that the nation’s SRB may have plateaued during the 2010s. Given the lack of exhaustive birth registration data in Vietnam, it is necessary to estimate and project levels and trends in the regional SRBs in Vietnam based on a reproducible statistical approach. We compiled an extensive database on regional Vietnam SRBs based on all publicly available surveys and censuses and used a Bayesian hierarchical time series mixture model to estimate and project SRB in Vietnam by region from 1980 to 2050. The Bayesian model incorporates the uncertainties from the observations and year-by-year natural fluctuation. It includes a binary parameter to detect the existence of sex ratio transitions among Vietnamese regions. Furthermore, we model the SRB imbalance using a trapezoid function to capture the increase, stagnation, and decrease of the sex ratio transition by Vietnamese regions. The model results show that four out of six Vietnamese regions, namely, Northern Midlands and Mountain Areas, Northern Central and Central Coastal Areas, Red River Delta, and South East, have existing sex imbalances at birth. The rise in SRB in the Red River Delta was the fastest, as it took only 12 years and was more pronounced, with the SRB reaching the local maximum of 1.146 with a 95% credible interval (1.129, 1.163) in 2013. The model projections suggest that the current decade will record a sustained decline in sex imbalances at birth, and the SRB should be back to the national SRB baseline level of 1.06 in all regions by the mid-2030s.