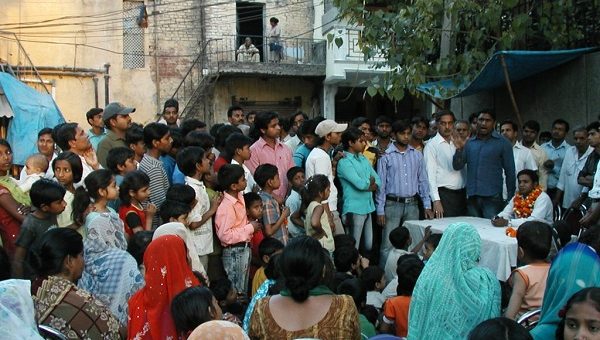 The projects conducted in this research area explore the unique complexity of Indian democracy through a variety of perspectives, timeframes and scales of observation. Historians scrutinize key moments and places in the co-construction of the nation and its diverse communities; political scientists, focusing on various institutions, observe the transformations of political representation; and sociologists analyse a number of public policies that exemplify ongoing redefinitions of citizenship.

Here several researchers study the intellectual encounters between Christian, Muslim and Hindu scholars in the early modern period. Others document and analyse practices of community construction and nation building from the late 18th century onwards.

These research projects observe the multiple actors, sites and forms of political representation in contemporary India.

Here we analyze a series of public policies under three major angles that are distinct yet connected: the impact of digital technologies, the evolving role of the state, and the redefinitions of citizenship.

This project started to answer a simple question: how can one understand Indian activism, its history, and the language it developed in the last decades without having a close look at activists’ everyday writings? Well, it’s impossible. This initiative is therefore progressively setting up a platform for referencing material on different protest movements in the country. This digital library offers full searchable content to scholars and concerned individuals. It includes 72430 items that cover the period 1975-2015 and are indexed according to their author (organisational or institutional) and approximate year of release. The idea behind the project is to collect, enlarge, and offer quantitative and qualitative tools of analysis for this printed material by associating scanned images with their related text: https://www.flickr.com/photos/parchaproject/