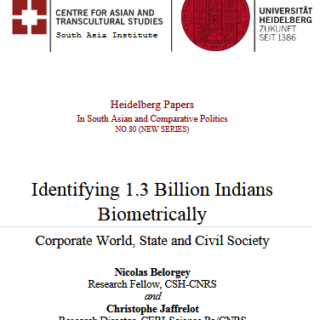 Nicolas Belorgey, a CNRS research fellow and member of the “History, Politics & Society” research area at CSH, has written an occasional paper series with Christophe Jaffrelot (Research Director, CERI-Science Po/CNRS) “Identifying 1.3 Billion Indians Biometrically“. This paper series has been published on 16th July 2021 by the Heidelberg Papers in South Asian and Comparative Politics.

The paper series can be found at: https://crossasia-journals.ub.uni-heidelberg.de/index.php/hdpapers/article/view/15479

Abstract: In 2009, India embarked on a scheme for the biometric identification of its people. This project was conceived by IT companies based in Bengaluru. The programme’s main architect, Nandan Nilekani, was in fact the head of one of these firms. The idea behind the project was to use digital technology – and the data it enables to collect – for economic ends. But to register the entire Indian population, the State had to be persuaded to be involved in the project, later named as “Aadhaar”. The rationale that secured the government’s engagement was financial: using Aadhaar would help disburse aid to the poor while minimising “leakages” caused by corruption and duplicates among beneficiaries. Yet, possessing an Aadhaar number gradually became necessary for a number of other things, too, including tax payment. When approached to rule on this matter, the Supreme Court dragged its feet and did not seek to decisively protect people’s privacy. As for the avowed aim of the scheme itself, Aadhaar did not improve the quality of the services rendered to the poor and its economic impact, too, remains to be proven, even if operators who believe that “data is the new oil” consider benefits in a long-term perspective.