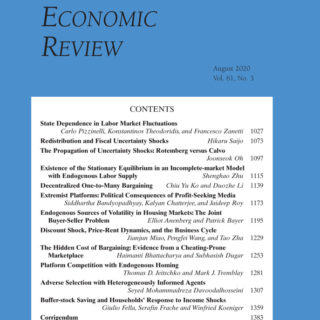 CSH’s director Nicolas Gravel, and researcher Mathieu Faure, both part of our Economics & Development research area, have released an article in the International Economic Review, a journal published by the Economics Department of the University of Pennsylvania and the Osaka University Institute of Social and Economic Research Association.

This article establishes an equivalence between four incomplete rankings of distributions of income among agents who are vertically differentiated with respect to some nonincome characteristic (health, household size, etc.). The first ranking is the possibility of going from one distribution to the other by a finite sequence of income transfers from richer and more highly ranked agents to poorer and less highly ranked ones. The second ranking is the unanimity among utilitarian planners who assume that agents’ marginal utility of income is decreasing with respect to both income and the source of vertical differentiation. The third ranking is the Bourguignon (Journal of Econometrics, 42 (1989), 67–80) Ordered Poverty Gap dominance criterion. The fourth ranking is a new dominance criterion based on cumulative lowest incomes.