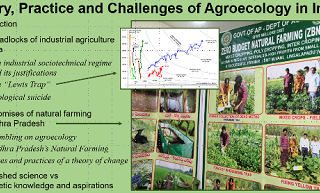 Dorin B., (2021), “Theory, Practice and Challenges of Agroecology in India” International Journal of Sustainable Agriculture , (9 May 2021)

Bruno Dorin, head researcher of “Economics and Development” at CSH, has written an article “Theory, Practice and Challenges of Agroecology in India”. This article has been published online on 9th May 2021 by the International Journal of Agricultural Sustainability (IJAS- Taylor& Francis Online). This article/essay is an attempt to build a theory of agroecology where micro-farmers should have a strong comparative advantage (whereas they are a burden today in industrial agriculture and mainstream economics).

Abstract: With the Green Revolution in Asia, the gap in agricultural yield with the developed world has been closed, while the gap in farm labour productivity has greatly widened. This reveals a deepening agrarian and environmental crisis in India. The industrial mode of production has led to the massive use of costly industrial inputs to increase yields and offset economies of scale that are almost impossible to achieve in this densely populated country. Such a development path is a trap for millions Indian micro-farmers and their natural capital. We then unveil the promises of a type of agroecology called “natural farming” that has developed in Andhra Pradesh, a state in South India. Andhra’s natural farming has pioneered the adoption of technical and organizational innovations that could lead to the first large-scale agroecological transition in the world. But in 2019, these local innovations were accused of following a regressive path and endangering the country’s food security. This attack reveals the current omnipotence of the industrial sociotechnical regime over science, as well as a conception of science and progress antithetical to agroecology.