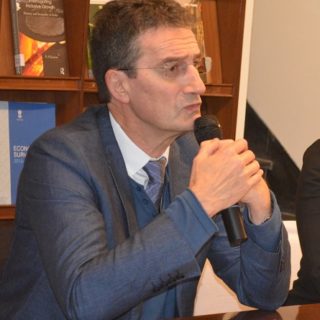 Pr. Sansonetti
The Centre for Social Sciences and Humanities (CSH) and the prestigious Collège de France, one of the leading French international academic institutions, launched the Collège de France Lecture Series. The official series launch took place on 12th January 2015 at the CSH with Professor Philippe Sansonetti. World-renowned scientist in the field of microbiology, Professor at the Pasteur Institute and Chair of Microbiology and Infectious Diseases at the Collège de France, Prof. Sansonetti gave a series of four additional lectures in three Indian cities.

In March 2014, as a first step towards this new initiative, Collège de France Professor Anne Cheng, distinguished specialist of Chinese thought and intellectual history, delivered several talks in various Indian universities including one at CSH on the concept of “Chinese Universalism”.

Under the aegis of the CSH, the Service for Science & Technology and with the support of the French Embassy in India, this conferences series is nurturing a long tradition of scientific partnerships and collaborations between France and India.