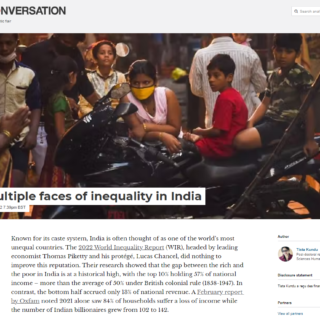 Kundu Tista , 2022. The multiple faces of inequality in India, The Conversation (May 30)

Dr. Tista Kundu, a post-doc research fellow at CSH, wrote an article entitled “The multiple faces of inequality in India”. The article has been published in The Conversation, on 30 May 2022.

Abstract: Known for its caste system, India is often thought of as one of the world’s most unequal countries. The 2022 World Inequality Report (WIR), headed by leading economist Thomas Piketty and his protégé, Lucas Chancel, did nothing to improve this reputation. Their research showed that the gap between the rich and the poor in India is at a historical high, with the top 10% holding 57% of national income – more than the average of 50% under British colonial rule (1858-1947). In contrast, the bottom half accrued only 13% of national revenue. A February report by Oxfam noted 2021 alone saw 84% of households suffer a loss of income while the number of Indian billionaires grew from 102 to 142.

The full article can be read at:
https://theconversation.com/the-multiple-faces-of-inequality-in-india-182074