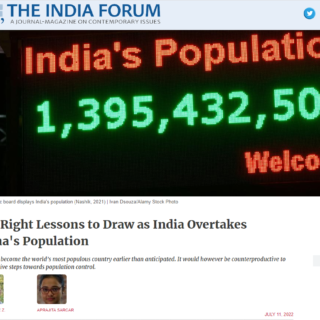 Christophe Z. Guilmoto, a senior fellow in demography at IRD-CEPED Paris and CSH Delhi and Dr. Aprajita Sarcar, a post-doc researcher, wrote an article entitled “The Right Lessons to Draw as India Overtakes China’s Population“. The article has been published on The India Forum, on 11 July 2022.

Abstract: India will become the world’s most populous country earlier than anticipated. It would however be counterproductive to take coercive steps towards population control. Since 1990, the United Nations (UN) has ritualised the annual spotlight on global population trends by celebrating 11 July as World Population Day. While this year will see yet another unfurling of national anxieties about numbers, it comes with an important revelation. In a year’s time, the UN’s World Population Prospects 2022 shows, India’s population will catch up with China’s.

The article can be downloaded at: https://www.theindiaforum.in/article/india-overtaking-china-population-lessons-to-draw