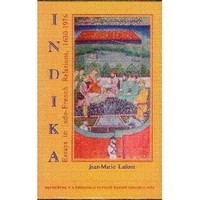 This book attempts to study some of the lesser-known aspects of the Indo-French relations.The core of the research is about the French in the service of Indian States (Hyder Ali and Tipu Sultan, Madhoji Sindhia, Shuja ud-Daula, Asaf ud-Daula and Ranjit Singh) before the onset of British rule in India. It focuses on the modernisation of the armed forces of these states and the transfer of military know-how and technologies in the eighteenth and early nineteenth centuries.

It also deals with French curiosity towards Indian history and civilization: French involvement in the cultural life of these states, collection of manuscripts, sponsoring of artists like Nevasi Lal, Mohan Singh or Imam Baksh Lahori, a passionate taste for Indian architecture, archaeological excavations in Punjab and Peshawar, early Indo-Greek and Graeco-Bactrian studies and the discovery of Gandhara Art. Such intimate connections between some Frenchmen and Indian society at large come through their marriage into Indian families. One full chapter is devoted to Bannou Pan Deï, wife of General Allard, and to the history of this family in Lahore and in Saint-Tropez (France).

The last two chapters bring the story down to 1976 in analysing Indian influence on Albert Camus and André Malraux, two key figures of the contemporary French intelligentsia.The book has 72 black and white illustrations.