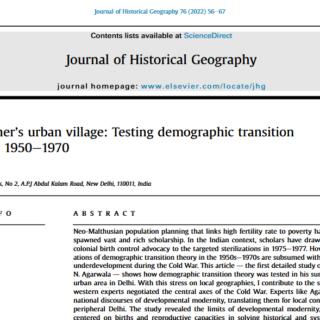 Dr. Aprajita Sarcar, a post-doc researcher at CSH, wrote an article entitled “A demographer’s urban village: Testing demographic transition theory, Delhi 1950-1970”. The article has been published in the Journal of Historical Geography Elsevier, volume 76, on 20 April 2022.

Abstract: Neo-Malthusian population planning that links high fertility rate to poverty has been an area that has spawned vast and rich scholarship. In the Indian context, scholars have drawn continuities from late colonial birth control advocacy to the targeted sterilizations in 1975-1977. However, the different iterations of demographic transition theory in the 1950s-1970s are subsumed within a unilinear reading of underdevelopment during the Cold War. This article – the first detailed study of the demographer Dr. S. N. Agarwala – shows how demographic transition theory was tested in his survey of fertility in a periurban area in Delhi. With this stress on local geographies, I contribute to the scholarship on how non-Western experts negotiated the central axes of the Cold War. Experts like Agarwala negotiated transnational discourses of developmental modernity, translating them for local contexts, such as villages in peripheral Delhi. The study revealed the limits of developmental modernity, in the way this vision centered on births and reproductive capacities in solving historical and systemic inequities. In the paternalistic solutions that Agarwala proposed from the findings of his study, we find an alternate reading of the Indian population control program: one that did not rest on sterilizations as the dominant mode of achieving the small family norm.