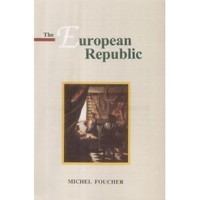 Modern Europe, that ancient continent, which is currently on the path of self-discovery, is the result of an unprecedented historical convergence and a new geography in yhe making. Its unity, which springs from the diversity of the Nations-States, represents a common heritage : ‘The European Republic’. This Republic considers itself to be the hub of reorganization of the continent.Reversing the classical interaction between space and politics (the politics of States are dependent on their geography, according to Napoleon), the author argues that it is politics that define the geography of modern Europe. It is the very people of Europe -aware of history in all its progressive and regressive stages and valuing above all, public opinion as well as the right to question- who will decide its fate. It is in this perspective that the revived questions of the final frontiers of Europe, should be appoached, as a political decision.