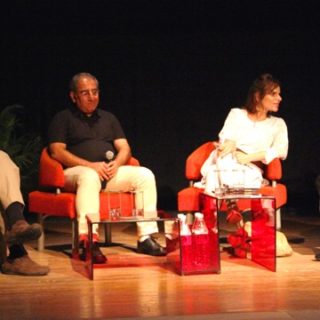 [CSH-PSBT Screening] All Rise for Your Honour by Sumit Khanna

The Constitution of India defines and declares the nation state’s common goal: to secure, to all citizens, justice, social, economic and political, liberty, equality and fraternity. However, serious problems beset the judicial system, making it dysfunctional, unaccountable, inaccessible and insensitive, especially to the poor. The award-winning film by Sumit Khanna is an attempt to decipher the judicial process from the standpoints of all the stakeholders: people who are the seekers of justice, lawyers who are the intermediaries of justice and the Judiciary that dispenses justice, in the process, understanding how far removed we are from the Constitutional vision of justice.
Prof. Mohan Gopal, Sumit Khanna, Prof. Leila Choukroune and AK Ganguli
Prof. Mohan Gopal
Prof. Mohan Gopal has been working intensively on the Indian judicial system for the last 16 years. A former Director of the National Judicial Academy, Bhopal from, and a former Director (Vice Chancellor) of the National Law School of India, Bangalore, he has taught law at Georgetown Law Centre, Washington, DC and at the National University of Singapore.
As chief counsel in the legal department of the World Bank in Washington, DC and counsel in the Asian Development Bank, Manila, Prof. Gopal worked for several years on international law and law and development. Since 2011, he is Director of the 25 year old liberal, social democratic policy think tank, the Rajiv Gandhi Institute for Contemporary Studies, New Delhi. He also chairs the Supreme Court’s National Court Management Systems Committee (NCMS) and is a member of the recently established National Judicial Education Council of the Supreme Court of India.
AK Ganguli (TBC)
Amal Kumar Ganguli is a Senior Advocate, Supreme Court of India. He has international memberships with SIAC, KLRCA, UIA, Paris ILA, ITLDC, ILA- London, IBA- London, LCIA, LAWASIA, IPBA, ASIL, SAARC – Law, WJA- Washington . He is also associated with National Institutions like UIA-India Chapter ISIL, ILI, ICA, ICADR, DAC, NHRC, SCBA, HCBA and many more.
Amal Kumar Ganguli has a large experience in arbitration followed by Constitutional Issues, Inter State Water Disputes, Corporate Law, Public Interest Litigation (as Amicus Curiae). He was also Senior Counsel in the panel of Government of India Since 1984 and Indirect Taxes. He has been awarded Justice Krishna Iyer Award sponsored by Capital Foundation Society. He was consultant at Delhi High Court Arbitration Centre (DAC).
Prof. Leila Choukroune
Prof. Leïla Choukroune is Director of the Centre for Social Sciences and Humanities (CSH), New Delhi India. When associate Professor of international economic law with the Faculty of Law of the University of Maastricht in the Netherlands, she was Deputy Director of the Institute for Globalization and International Regulation (IGIR).
Her research focuses on the interactions between trade, investment and human rights and is applied to emerging countries, China and India in particular. She has published numerous scientific articles and authored several books including Judging the State in International Trade and Investment Law (Springer), forthcoming 2016, and Global Health and the Emerging World: An Integrated International Trade Approach, with Sangeeta Khorana (Springer), forthcoming 2016. She is the Editor of the Springer book series International Law and the Global South and member of the Editorial Board of China Perspectives.
She is an independent adviser to the International Federation for Human Rights (FIDH) and a Member of the French National Books Commission (CNL).