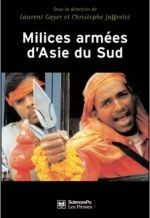 There seems to be no end to the growing number of victims of civil war, guerrilla warfare and military repression on the Indian subcontinent, despite the absence of interstate wars over the past 10 years. These conflicts involve militia of the paramilitary kind, whose ideology, sociology and strategies this book undertakes to unveil.

Very influential in India and Nepal, maoist organizations claim to be revolutionary. But the people they aspire to liberate are more often than not made up of lower castes and tribes, with the result that their guerrilla appear more ethnic than universalist.

They resemble in this aspect national liberation movements whose goal is the political independence of linguistic, religious and tribal communities. However, in Sri Lanka, Kashmir or Myanmar, these groups are also part of movements of national oppression.

This again is the case with nationalist or religious movements in India, Pakistan and Bangladesh, where Islamist militia, Hindu nationalists or Sikh militants exercise brutal control over their respective communities by means of a veritable cultural police.

Militia and states share a complex relationship. At times on the way to becoming true states within a State, these militia may equally be instrumentalized by the powers-that-be in order to enforce their authority at the local level.

Christophe Jaffrelot is director of research at the CNRS and director of the Centre for International Studies and Research (CERI) at Sciences Po.

I: The Maoist Phenomenon

Chapter 1
Naxalites of Bihar:  Between Arms and Urns
– Nicolas Jaoul

Chapter 3
The LTTE: A Movement of Liberation and National Oppression
– Chris Smith

Chapter 9
Militia of Khalistan: Servants and Users of the State
– Laurent Gayer