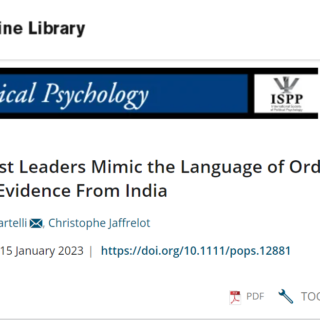 Abstract: How and where is democracy ‘hacked’? Studies examining the variability of the populist discourse rely on the—often tacit—assumption that global digital platforms are used similarly from one country to the other. By examining political rhetoric on Twitter, we show that populist communication is tailored to a particular audience profile rather than a particular social media (SM). More specifically, we compare Indian Prime Minister Narendra Modi’s tweets with his addresses on multiple mediums. We describe how Modi uses wide-reaching media such as radio to unfold a populist narrative based on institutional disintermediation, layman’s language, counselling and the staging of an intimate conversation with the masses. Modi uses more elitist and cosmopolitan SM sites in India, such as Twitter, to mitigate his populist credentials, and introduce himself as a respectable democratic leader favouring multilateral collaborations, banal nationalism and Gandhian peace-building. The variability of his political rhetoric across seven address formats indicates that Modi is populist tactically rather than ideologically, which complicates the tenets of the dominant ‘ideational’ populist paradigm. To further ground our argument empirically, we venture into comparing Modi’s and Trump’s tweets. We suggest that due to the popularity of Twitter in the United States, it was strategically useful for the former President of the United States to act populist on the platform, while that is not the case for Modi. This tends to indicate that not enough attention is given to intermedium studies that complement comparisons between states/regions with comparisons nested within a coherent political space.