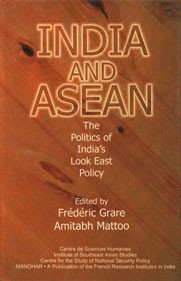 India and ASEAN: The Politics of India’s Look East Policy

Can international relations be explained by geopolitics alone? More precisely, does geographical proximity necessarily lead to intense interconnections? The principal concerns of the present volume on the India-ASEAN security relationships are rooted in these questions. India’s association with Southeast Asia goes back in history, and it has had great influence on the region, both linguistic and cultural. As is well known, economic and cultural relations flourished in the pre-colonial era, only to decline over time. At the beginning of the 1990s, economic and political relations between South and Southeast Asia were minimal and often antagonistic.

The situation changed considerably with the collapse of the Soviet Union and the subsequent reduction of the American forces in the region. There were fears in most ASEAN states of a power vacuum that a politically and economically dynamic China could easily fill. India too faced growing concerns at the possibility of a potentially hegemonic China wanting to dominate the region. This shared perception, together with India’s own liberalized economic policies compelled New Delhi to look East.

This evolving relationship between India and ASEAN, however, raises many questions: How does India perceive itself on the regional and international scene? How is it perceived by the ASEAN States? What are India’s and ASEAN’s main security concerns? Do they share a common threat perception and is there a consensus on the ways and means to manage common threats? What does India have to offer to the ASEAN States both politically, economically and militarily?

These are some of the issues that the CSNS (JNU, New Delhi), the ISEAS (Singapore) and the CSH (New Delhi) sought to address in a joint research programme entitled ‘India’s Foreign Policy at the Turn of the Millennium: Forging New Partnerships in Southeast Asia’ of which the present volume is the first result.