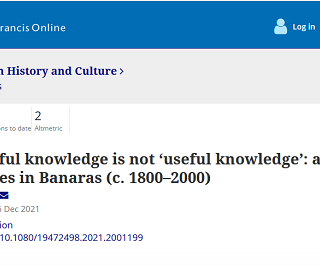 Guenzi, Caterina (2021), “When useful knowledge is not ‘useful knowledge’: astrology at universities in Banaras (c. 1800-2000” South Asian History and Culture ,

Dr. Caterina Guenzi, a researcher at CSH-CNRS and associate professor at the Ecole des Hautes Etudes en Sciences Sociales (EHESS), wrote an article titled “When useful knowledge is not ‘useful knowledge’: astrology at universities in Banaras (c. 1800-2000)“, published by the journal South Asian History and Culture, on 16 December 2021.

Abstract: The setting up of departments of Vedic Astrology in Indian Universities, promoted by the governing Hindu nationalist party (BJP) in 2001, aroused strong reactions and was amply debated by political and social analysts. However, no scholarly investigation has been hitherto conducted about the historical, social and intellectual context in which astrology was shaped, and is still practiced, as an academic discipline in India. This paper interrogates the processes through which jyotiṣa (the astral discipline) has been transmitted and adapted to the academic institution by focusing on two Banaras universities – the Banaras Hindu University and the Sampurnananda Sanskrit University. In both, jyotiṣa has been taught since colonial times. Based on a combined analysis of historical, textual, and ethnographic sources, this study shows that debates about the legitimacy of astrology dating from colonial times have revolved less around the question of its truth and validity than around different ways of understanding and characterizing ‘useful knowledge’.