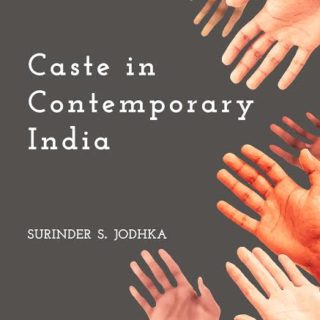 Many in urban India tend to believe that caste would and should have disappeared by now had it not been politicized and used by wily actors in India’s electoral politics. Its institutionalization through the reservation policy, the quotas for Scheduled Castes and Other Backward Classes, is also cited as the other reason for its continued survival.

Caste in Contemporary India
Against the popular middle-class assumption that the continued presence of caste is a result of incomplete modernization of India’s economy and its cultural values, the book constructs a different trajectory of caste. The institution of caste has seen significant changes, particularly during the past four or five decades. This change has been experienced almost at all levels and almost in all regions of the country, although not following a single evolutionary or linear path of progression.

More importantly, even when the institution of caste and the social and economic structures sustaining it undergo significant changes, caste has not disappeared. Even in regions where the change in social and economic domains of rural life has been quite “radical” and the older order of caste has nearly disintegrated, caste-based divisions and inequalities continue to matter and often overlap with the emergent disparities of the new economy, both rural and urban. The realities of caste in contemporary times are also not exhausted by analyses of electoral politics. Caste matters in multiple ways and in different spheres of social, economic and political life, sometimes visibly, sometimes not so visibly.

The book is an outcome of Prof. Jodhka’s work on caste completed over the past decade and half. Most of this research has been in the form of empirical explorations of contemporary manifestations of caste carried out both in rural as well as in urban settings in northwest India. They represent a specific mode of engaging with the subject, which is different from the manner in which caste was imagined and studied by sociologists/ social anthropologists and other social scientists until the 1970s, or even in the 1980s. However, the book is not only about documenting the empirics of caste in contemporary India, but tries to present a framework that would hopefully help us understand social inequalities in other societies as well.