[CSH Seminar Series-ONLINE] The creation of Hum Do Hamare Do (A. Sarcar)

The creation of Hum Do Hamare Do 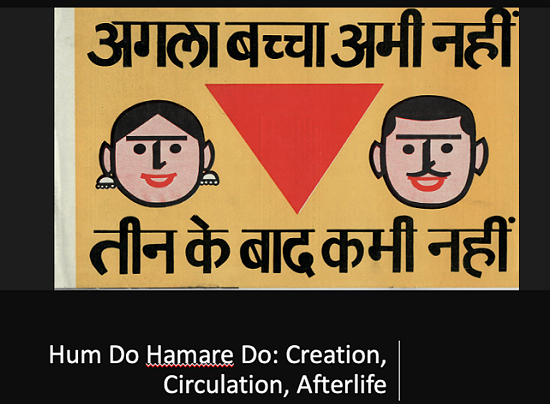 To get priority access in case of large affluence, kindly register to:
neeru[dot]gohar[at]csh-delhi[dot]com

Abstract: The paper explores the visual artifact that represented the national family planning programme in India: Hum Do Hamare Do (We are Two, will have Two Children). The campaign was created in 1967. It consisted of a couple with two children: a boy and a girl in an inverted triangle. The inverted red triangle, simultaneous to the campaign, became the symbol of the international family planning movement. Tracing its creation and circulation helps unearth the assumptions of developmental modernity that guided its ideation. The slogan and its visual partner – the inverted red triangle – traveled across and beyond India to signify the nearest family planning center. Posters, signposts and traveling theatrical performances showcased the power of the symbol and its impact on the developing world. The paper will trace the history of this campaign and ask what factors enabled its creation. The mythical family within the inverted triangle, attained a life beyond governmental advocacy to become a cultural marker of modernity in postcolonial India. In many ways, it became a visual representation of the Indian middle class.
Anxiety of population explosion steered India to become the first nation in the world to have an official policy on population control. The worry of burgeoning numbers was tied to nation-building through economic rationality- no matter ho much the nation was planning the economy, building dams, technological institutes and hospitals, the per capita income could not rise because of increase in population. This line of reasoning reverberated across politics of power blocs of the Cold War. The paper knits this context into the narrative of the campaign and explains how it became a way for the idea of the small family as the modern family to retain legitimacy even through the years of forced sterilizations of the Emergency (1975-77). Such an investigation is also useful to understand the histories of mass media-led public health campaigns in the global south. 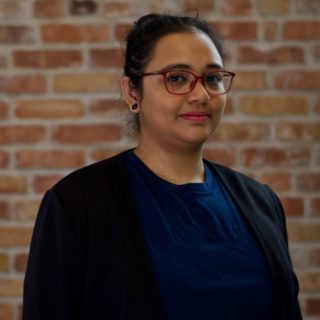 Aprajita Sarcar is a historian specialising in the postcolonial history of family planning in India. Her research interests span disciplines, including, inter alia, gender, urban histories, histories of health governance, and population control in Asia. She was initially trained as a journalist and completed her M. Phil in Social Medicine and Community Health from JNU and received her PhD from the Department of History, Queen’s University, Canada, where she examined the nuclear family in the backdrop of the urbanising cities within India. She is currently a postdoctoral fellow at Centre de Sciences Humaines, New Delhi.
For more info: