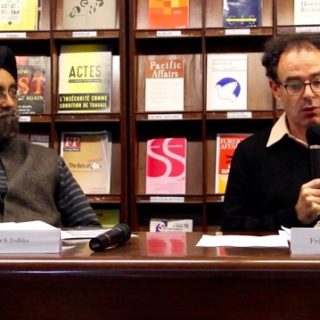 Alain Caillé, the founder of the MAUSS (the Anti-Utilitarian Movement in the Social Sciences) invited some fifty French intellectuals, mainly from the alternative left, to compose together the Convivialist Manifesto. A Declaration of Interdependence. Moving beyond the critique of utilitarianism in all its forms (theoretical, ideological and practical), the Manifesto finds its general inspiration in Marcel Mauss’s famous Essay on the Gift, a foundational text of the Anti-Utilitarian Movement. In response to the multiple crises of our times – the ecological, economic, moral and existential crises that tear society apart and threaten the survival of the human species – convivialism reaffirms some basic principles (common humanity, general reciprocity, individual morality and control of hubris) and seeks a constructive response to Mauss’s question: “How can we live together with our differences without massacring each other?”

By now the Manifesto has been translated in many languages and spawned a lively debate in Europe (France, Germany and Italy) and Latin America (Brazil). In this seminar we want to bring the critique of anti-utilitarianism and the convivialist proposals to the subcontinent and critically probe their presuppositions and their potential relevance for developing societies from a post-colonial perspective. The idea behind the seminar is neither to reject nor to celebrate convivialism, but to critically inquire in a friendly, dialogical setting whether “common humanity” is a fundamental presupposition or merely an inspirational horizon in a society like India that is so thoroughly divided by class, gender and caste. Assuming that convivialism is both a project and problem, we want to find out if and how we could possibly reformulate so as to make it workable over here.

Never before has humanity had such a wealth of material resources and technical and scientific expertise at its disposal. Overall, it has become rich and powerful beyond the imagination of anyone in former centuries. That it is any happier as a result has yet to be proved. Even so, there is no desire to turn back the clock: we are all aware that each new day brings with it ever more opportunities for personal and collective fulfilment.

At the same time, it is no longer possible to believe that this accumulation of power can go on forever – in just the same way, according to some unchanging dictate of technical progress – without eventually rebounding on itself and putting humanity’s physical and moral survival at risk. With each new day, the signs of potential catastrophe are emerging ever more clearly and worryingly. The only issues in doubt are which threats are the most immediate andwhichoftheurgent problems should take priority. These threats and problems must be constantly borne in mind if we are to give ourselves a real chance of seeing today’s promises come to fruition.