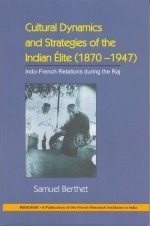 The history of French culture in India tends to show that if for long conflicts in the colonial context have been studied in a dual perspective, they can be better understood in a polyphonic one. From the nineteenth century onwards, along with the opposition between the British tending to increasingly impose their dominance, and the Indian elite trying to assimilate and manufacture a modern identity of its own, France and French culture provided an alternate space for cultural negotiation. Perceived in Europe and beyond as the modern culture par excellence, the most anglicized of the Indian elite engaged themselves in a process of appropriation of French as an alternate path for cultural discourse. The direct consequence of this was the rapid progress of French Language in Indian universities by the end of the Nineteenth century.The British authorities were prompt to react and tried to contain the development of French culture within the educative institutions. The new space for culture making created by the Indo-French dialogue is now open to political interpretations, at times conflicting. The relations between Rabindranath Tagore and Sylvain Lévi is one instance of the difficulties for a colonizing power to acknowledge the modern ferment within the colonized regions of the world in the twentieth century. Nevertheless, as the volume so eloquently portrays, the dynamics of cultural and scientific exchanges were in motion between France and India, through the Indian diaspora and French intellectuals associating themselves with India and Indian reformist movements.

1. The British in India and French Culture
2. The Roots of Francophilia among the Indian elite
3. The Birth and Growth of the French Language in India
4. The French Community in India
5. Elite Mobility: The Indian Diaspora and France
6. France and the Indian Nationalist Movement: From Sovereignty to Solidarity
7. Foreign Influence and the French Culture in India
8. French Indologists and the Debate about Indian Civilization
9. Conclusion