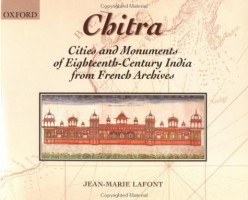 Chitra: Cities and Monuments of Eighteenth-Century India from French Archives

Among the several European peoples who had early contacts with India, the French occupied a special position. Recent research by French and Indian scholars has revealed many new aspects of the interaction that took place between France and India during the seventeenth and eighteenth centuries. Libraries and archives in France contain rich and as yet unpublished documentation on the subject.In the book Jean-Marie Lafont brings together for the first time a collection of drawing and maps of cities and monuments in eighteenth-century India. The fifty colour illustrations of plans and views of palaces, cities and monuments by French and Indian architects and engineers published here are drawn from the Centre des Archives d’Outre-Mer, Archives Nationales and the Gentil Album of Palais Indiens at the Bibliothèque Nationale, Paris.

A lucid introduction gives the historical background of these collections and traces them to the French Compagnie des Indes Orientales with its trading posts on the sea-shores of India. It also links them to the French specialists who entered the service of the Indian states which emerged in India after the collapse of the Mughal empire, while other political units like the Maratha Confederation, the sultanate of Mysore or the kingdom of Travancore were evolving into their own political and peculiar identities. India, as seen in this book through its thriving cities and beautiful monuments, is astonishingly “modern”, with its own urban dynamics and a flourishing trade with the world.

Lavishly illustrated and beautifully produced, as part of the French Sources of Indian History series, this book will appeal to historians and general readers interested in India’s encounter with the West.